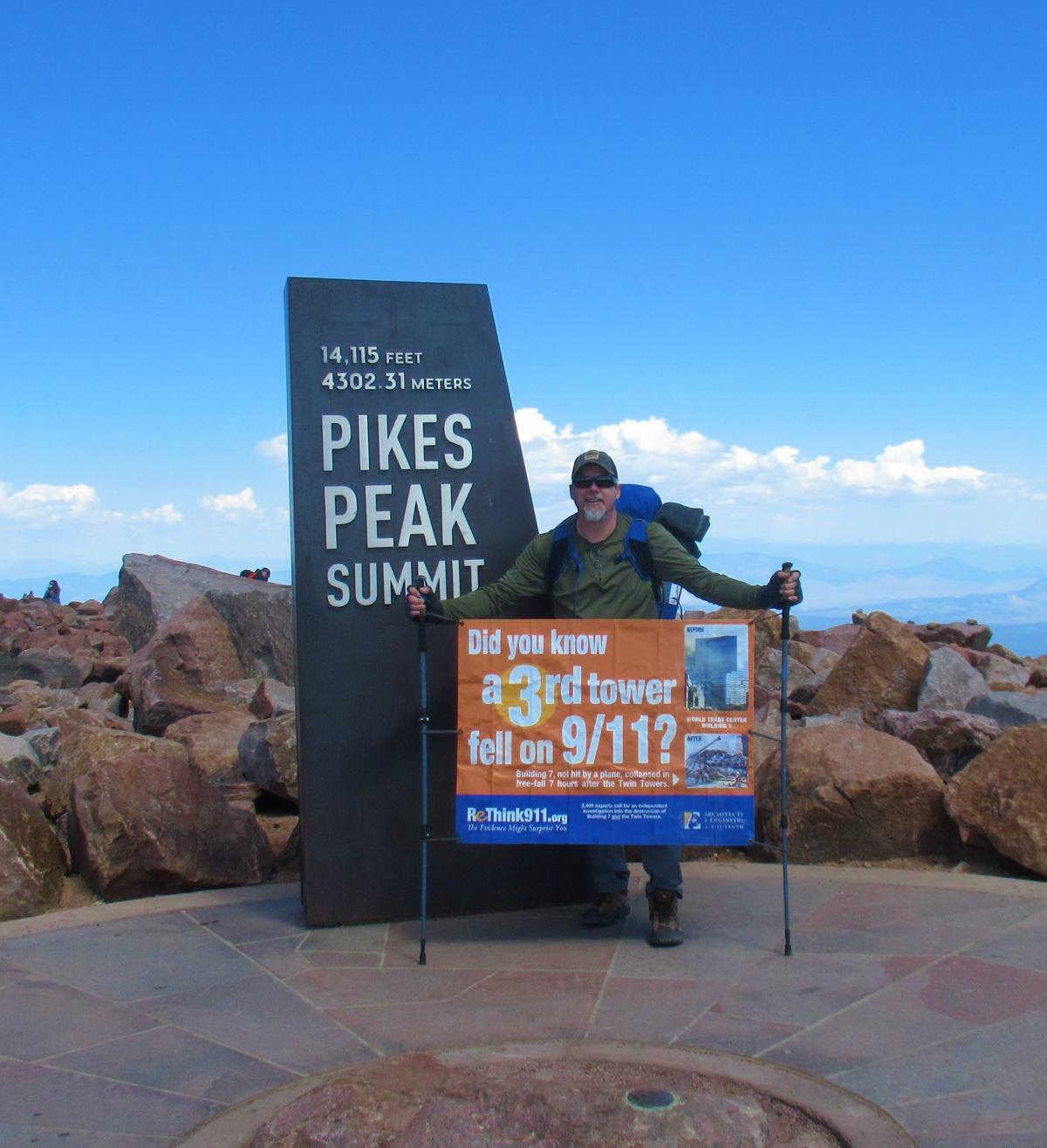 Did you know a 3rd tower fell on 9/11? Click here to head over to the Architects & Engineers page for more information on that 3rd tower.

Trail Report: Given the trailhead and peak elevations for this hike (~6,600 and ~14,100 ft respectively) opted to spend a few days in Colorado Springs acclimating to the elevation prior to attempting Pikes Peak. The morning of Day 2 was spent hiking the Manitou Incline as part of the acclimation process (roughly 2,000 ft of elevation gain in 1 mile).

The push up to Barr Camp (base camp, 10,200 ft) began around 7 am on Day 5. Arrived at Barr Camp just after 10 am and set camp well in advance of the afternoon thunderstorms that are common for this area this time of year. Was immediately handed several very good pancakes by the Barr Camp staff that were leftover from breakfast. At roughly 6.5 miles and 3,600 ft of elevation gain it averaged out around 30 min/mile for this section. Spent the early afternoon enjoying the lounge of Barr Camp Main Cabin as several thunderstorms passed through, one of which dropped a decent amount of hail on the campsite. By late afternoon it had all melted out and the weather was back to clear skies, warm and dry. Had an early dinner and bedded down at 8 pm.

Day 6 wakeup at 3:30 am, had breakfast and broke camp just before 5 am. Broke through the treeline at roughly 12,200 ft (2k above Barr Camp) around 7:30 am. The elevation helped balance out the sunlight, temperatures were comfortable (not too warm) even with clear skies. The trail grade was steady but mellow for the most part and well marked, only got off trail once momentarily and quicky corrected. Summited right around 10:00 am, 30 minutes topside and then descended to the treeline to beat the early afternoon thunderstorms. Picked up a mild headache around 13,500 ft which lasted through the summit and subsequent descent, it faded off around 12k ft, no nausea or other symptoms...but could definitely feel the effects of altitude. If you're not used to this elevation highly recommend acclimating beforehand - am convinced it made a big difference.

In retrospect it would be better to start up the trailhead for Barr Camp a bit earlier in the morning, say 6 am. By 7 am the sun was rising over the face of the initial incline and temperatures (although comfortable initially) began rising rapidly. Any later than 7 am - expect to use/bring extra water along with the extra pack weight that entails. There were no obvious sources of water until just before Barr Camp, so plan for this section to be dry. Not much water after Barr on the way to the summit either. A 3 liter hydration bladder and 2 liters of water with electrolyte mix were plenty for each of these two sections.

Here's some additional background on Pikes Peak via the Barr Trail.

Back to main blog page